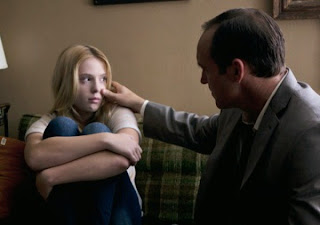 I want to see more from Agent Coulson a.k.a. Clark Gregg as a filmmaker. Clark Gregg pulls triple duty and writes, directs and acts in this unique dark comedy with deep emotional depth. Clark has directed "Choke" back in 2008 but I never saw that. After "Trust Me" I want to see it. What Clark does is direct a fresh and unique movie that his own style and that's hard to do. You want to standout in the film industry and I think he has done just that. This follows Clark's character as he is a talent agent in the heart of Hollywood getting the best talent to work with. He finds a young actress who he starts to book auditions for. And thats all I will say because this is a good movie. Clark doesn't shine a good light on this industry and basically portrays everyone as a terrible person. Clark's character, however, is the good guy who is nice and does his job very well. I think that's why he stood out the most because he was the only character I really liked. The dialogue is funny, dark and engaging all at the same time. We are taken "behind the scenes" of what a talent agent does and how to book clients a movie. I found this aspect really intriguing and fun to watch. The other actors include: Sam Rockwell, Molly Shannon, Felicity Hoffman and William H. Macy. Let's just say Clark Gregg knows some people. The other actors are very good in their roles but I was really impressed by the character of Clark Gregg. The cinematography is good and nothing that really impressed me except for the ending shot, but that would be spoiling something. The film is only an hour and twenty minutes long but it felt like it was two hours…in a good way. I was so invested in this world and story that I thought I was watching an epic two hour movie, when in reality it went by fast and it was nowhere close to that time. This was a funny, dark movie with a lot of depth and what Hollywood can be like sometimes. 8/10
(Review by Chase Lee)