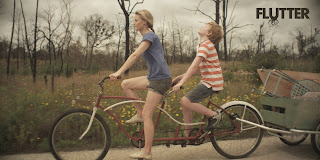 Before the DIFF opening, I had the honor to pre-screen FLUTTER and attend a Q and A at the home of character film producers Glenn Morshower and his wife. Via SKYPE, we were able to learn the back story of this gift of love from son to mother, writer/director Eric Hueber ( former DIFF Doc RAINBOW's END), himself a Texas boy from the Piney Woods.

The film centers on the unconditional love relationship between JoLynn (Lindsey Pulsipher, HATFIELDS & MCCOYS, TRUE BLOOD) and her 9 year old animal loving son Johnathan (Johnathan Huth, Jr. in his first role). Johnathan portrays Johnathan as sweet, imaginative, very likable, mischievous and innocent. Mr. Hueber told us he had recently lost his own mother, who was also a teen mom, and told us this script was the most important one he has ever written. His own upbringing had been full of trials and tribulations but he never doubted his mother's complete and unconditional love for him, no matter what his family was going through. He felt compelled to write the script for his first narrative film to honor her and show the constant, quiet self-sacrifices moms make everyday as well as examine the depths of unconditional love between mothers and their children. He feels it is a story that everyone, parent or child, can relate to.

In short, the story is nothing short of amazing. Dev Shapiro (Selig Polyscope) labeled it a cross between Winter's Bone and Beast's of the Southern Wild and that fits quite well. Johnathan is growing up in abject poverty, with absent musician father David (Jesse Plemons- BREAKING BAD) and grandparents nearby. The house is full of life and quiet chaos as they raise parakeets to sell. A variety of dogs and other pets wander in, out and around. Grandfather Mark (Glen Moshower- TRANSORMERS, 24, DALLAS) is trying his best to be the father, to his grandson, that his own son David has not been, while intervening to keep the peace between JoLynn and his wife Linda (Dallas local Reis Myers McCormick) who is hell bent on proving that JoLynn is unfit to raise Johnathan. Johnathan has severe glaucoma which creates a painful pressure behind his eyes and will eventually cause him to go blind. He spends his days largely unsupervised near his house, with his constant companion pet pig, Wee Wee, and the fruits of his vivid imagination (animated in the film). He loves the sea, fighting sea monsters and creating play props from whatever he finds lying around. His childhood is of an older time, without technology and the trappings of a myriad of youth sports practices, where a young imagination can grow and flourish. Often on his own, he occasionally gets into trouble. JoLynn also grows marijuana to bake into brownies for Johnathan whenever his eyes hurt him and spends her days trying to meet their needs. The grandparents are also on a fixed income and can be of little help. JoLynn ultimately has to overcome some hurdles and make some painful decisions in order to keep them together as she does the best she can to pay the bills. The relationship between mother and son is magical, as they navigate what the world throws their way. In watching the film, as a mother of three, I could identify both with grandmother and her desire to call CPS to come and rescue the boy from the shambles of a house and what would seem to be neglectful upbringing. But instead I watched in wonder at the love that was poured out from mother to son, in a relationship that sadly many young children do not get to experience in middle to upper middle class home with two parents. The carefully chosen cast are also joined by Charles Halford (TRUE DETECTIVE) as JoLynn's friend Curtis who clearly cares for the boy and tries to do what he can to help them both, when he can hardly manage his own life. Curtis is a main emotional support for JoLynn and is the type of friend to her that would give the shirt off of his back, if he had a clean one. The gentle giant ends up being more big brother to Johnathan, than the father figure he so desperately needs. But it is clear that the rock in Johnathan's life is his mother.

The film is enhanced by a solid score and a real feel for the setting, which is rural Texas. It inspires compassion and the desire to understand and empathize, as opposed to casting judgement and feeling frustration with JoLynn's thinly veiled parenting. It would be so easy to be horrified a her custodial parenting skills, or lack there of, or be angry at how often Johnathan is left to his own devices where his health and safety could be at risk, but somehow the rough cut edges are smoothed and softened and we find ourselves wishing every child had this much emotional security and acceptance in his or her life. And the unplugged time to develop an imagination as opposed to always being hooked up to video games, computers or cell phones. Despite his living conditions we come to realize that Johnathan is blessed, in ways often hard to see. The stars are the story and the setting, aptly enhanced through the key performances. While the ending is obscure and unclear, we are optimistic for the pair. Flutter is indeed a winner.
(Review by Cheryl Wurtz)

Posted by Dallas Movie Screenings at 9:32 AM