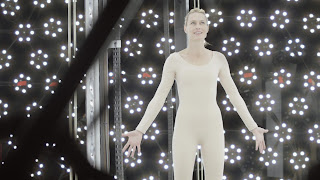 This is a visual treat and will melt your mind…in a good way. This is a film about Robin Wright, playing herself, and she is an actress who sells her image and name to a movie studio, so they can use a digital replica of her for a long time. This is all I will say about this film as it is a story that has been told, in the sense of a movie looking at the lives and mental state of an actor/actress behind the scenes. But what the director does is create this visual feast that oozed originality and felt fresh on the subject matter. And that's what I really liked about it was the fact it felt fresh and original. Robin Wright is amazing even though she plays herself. Her performance carries this entire film as it should since she is the main character. Jon Hamm, Paul Giamatti and Harvey Keitel round out the supporting cast and they are very good as well. The cinematography is gorgeous to look at especially in the middle of the film. There is a dolly shot at the end that was very well done to as it was an important plot point in the story. The film is two hours long and the pace was perfect. I was so invested in this story that I just wanted to see what happened and I think that's what made go by fast for me. The music was also beautiful as it made most scenes and made them more impactful than they already were. I thought this was an interesting, visual, deeply emotional and fresh look on the mindset of actors and actresses and I enjoyed every moment of it. This is my favorite film of the Dallas International Film Festival, so far, and it will go on my top ten for the year. I also realize I have used the words original, fresh and visual a lot in this review but these are best compliments you can give a film to stand out among the rest. 10/10
(Review by Chase Lee)