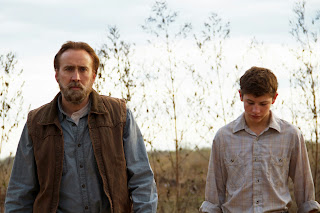 This goes into some dark places but the story is grounded and touching between the two main characters. David Gordon Green, director of "Pineapple Express", directs this gritty, dark look into the rural south. The setting for this film fits with the subject matter portrayed and it feels realistic as if they shot it your hometown. I am from Texas and they shot this in Austin and it felt like it was shot in Texas from the first shot. I do have to say it does feel like last years "Mud" in a lot of ways but "Joe" was darker in tone and, like I said, fit very well with the setting. Nicolas Cage plays a lumberman who meets Gary, played by Tye Sheridan, and they form that bond like Tye Sheridan did in "Mud" with Matthew McConaughey. Cages character looks for redemption or eventually falls to ruin as he plays an ex-con just going through life. But what was so interesting about Joe is that he was a layered character and there was a lot to him to where you were curious as to what was going to happen next because he was unpredictable. Tye Sheridan is great in this film as well. I have always said that Tye is the next up and rising star in Hollywood and he will definitely go places in this industry. But the standout is Gary Poulter who played the alcoholic, abusive father of Tye's character. Gary nails this role and it was definitely the best performance, however two months after filming Gary passed away in the streets of Austin. Gary was a street performer and wasn't necessarily an actor which made his performance even more memorable (besides him passing). The cinematography is great to look at and the majority is handy cam but it adds to the gritty realism. The film is almost two hours long but I was so invested in the characters that it flew by. The pace was filled with tension, uncomfortable and sometimes humorous moments to make a damn good story. It's not as good as "Mud", regarding their resemblance's, but I still enjoyed it a lot based on the suspense, story and strong acting. 8/10
(Review by Chase Lee)

Posted by Dallas Movie Screenings at 8:22 AM