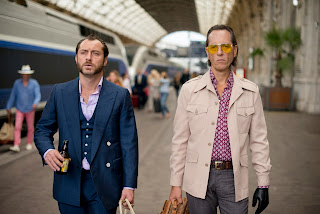 Jude Law is Dom f**king Hemingway. Jude was meant to play this role of a guy who is very likable, interesting and just fun to watch but, deep down, there is some heart to him and you sympathize with him in some parts when you know he is just trying to do the right thing. This is written and directed by Richard Shepard and I have to say the script is the biggest plus for me. It is written with a great blend of energy, flair and heart and making Dom Hemingway one of the most interesting characters I have seen on screen so far this year. Just from the opening scene you know this is going to be a great movie. The direction is also great as Shepard focuses on Dom in many lights as a their, con artist, and a father. This gives Dom some depth even though, at times, he is an out of control person.I can't express how good Jude Law is at this role. He seems like he had a lot of fun with it. All the other actors do very well but let's face it this is Jude's movie. The cinematography is crisp and in some scenes the colors are vibrant and pop on screen, like Dom's character does as well. So with the brilliant dialogue the colors and shots in each scene are great to look at. The film is only an hour and half long and it flies by, with a few scenes that are a bit slow, but I was so intrigued at what Dom was going to do next whether it be a con artist to someone or bonding with his daughter, I didn't care how long the movie was because I was deep in the story. This is a fun ride with heart and Jude Law becomes this character and that's the best compliment I can give an actor or actress. 7/10
(Review by Chase Lee)