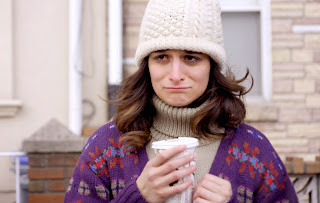 This isn't a bad movie. It's a typical, feel good indie dramedy but I found it to be enjoyable because of the two leads. Jenny Slate is the main actor with Jake Lacy, Pete from "The Office", as the "love interest". I thought they were likable, for the most part funny, and charming as an onscreen couple. The story is very basic. Donna, played by Jenny Slate, gets pregnant from a one stand she had with Max, played by Jake Lacy, and she must figure out her life, re-evaluate it and whether she wants to continue a relationship with this guy. Oh yeah she also is getting an aboration, that's kind of important. This isn't a fantastic movie but what I saw was Jenny Slate can carry a film. She wasn't bad and I would like to see more of her. At an hour and twenty minute runtime it goes at a steady tempo and goes through the beats of a indie romantic comedy. However I do like Jake Lacy, even when he was in "The Office", and would love to see more of his work. He is a funny guy. It's nothing special but I did enjoy Slate and I wouldn't mind if she was in more stuff in the future. 6/10
(Review by Chase Lee)