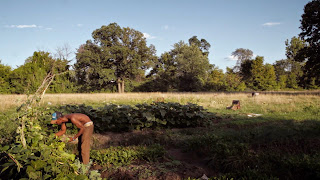 A part of the shorts competition program, 3 Acres in Detroit doesn't deliver...but it plants.

I'm sorry, that was a horrible farming joke.

I actually enjoyed the concept of this short film. I enjoyed it so much that I wanted it to be longer.

About two men who are getting themselves straight after having a broken past, these men build goals towards having a all natural organic farm to help the city of Detroit.

These men face certain dangers and problems such as robbery and basic human setbacks.

I love the short film and the concept, but I feel like it just ends. I wanted to learn and watch more.

I found it extremely intriguing as they started to build a greenhouse that had been a certain selling point for drugs in it's past. To watch them work through that experience, see them transform a place that is rotten, and turn it into something beautiful, 3 Acres in Detroit would be absolutely stunning. However, the audience never gets to see the finished result.

Another plus was to see how strongly they felt about their goals to turn Detroit greener.

I was not aware that things like this were even happening in Detroit. So right off the bat, the vocal point of this short film has sold me. It is incredibly informative, and it also lets the audience in on the crime rate that still smolders in the city.

Robbery is a huge risk for those who even have more than the bare minimum to survive. That's another aspect that I wanted the film to explore more. I wanted to know if the two men were actually okay by the end of the film, but I was just left hanging instead.

To be honest, I want Nora Mandray to follow up with the two gentleman.

It could actually make a decent length documentary.

I want further explanation of the two men's background, and why they decided to change their ways.

If they actually finish their goals.

The possibilities with this short film is endless.

But, I do commend Mandray on her subject matter. It is extremely difficult to keep an audience member interested, and I was through the whole 12 min.

Hopefully she will follow up with the men and their goals so I can sleep peacefully at night.

For now, I will just dream of sweet organic vegetables.

Trust me, you can spare 12 min. to know that there are dedicated individuals doing well for Detroit.