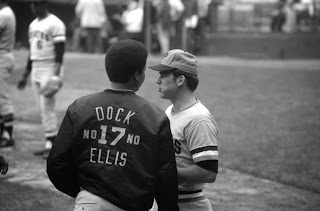 No No Still by Langer
When I saw the synopsis of this film, I immediately wanted to see it. I read it and it said, " A Pittsburgh Pirates pitcher pitches a no-hitter while on LSD in the 1970's." That already hooked me but what I got in return was so much more. This documentary is about Dock Ellis who admitted to use drugs or alcohol throughout his major league baseball career. This is essentially the telling of that story but what we really got was how broken Dock was. I felt like this was a rise and fall film of Dock Ellis and it was portrayed so well. It showed us the humorous, sad and deep moments between Dock, his players and his family and friends. Dock was a lot deeper then what he was in the first fifteen minutes of the documentary. In those moments, he was talking about how he used drugs while pitching and at first it was funny, but when the layers peeled back on Dock the more emotional it got. This is a great documentary showcasing someone's addiction to drugs and how he regretted using them. Luckily Dock changed his ways and sought rehab. He changed his life, got back on his feet as a motivational speaker but, unfortunately passed away in 2008 due to liver disease. What I also got from this great story is that Dock was a fun, great man. 8/10
(Review by Chase Lee)

Posted by Dallas Movie Screenings at 1:59 AM

Email ThisBlogThis!Share to TwitterShare to FacebookShare to Pinterest
Labels: Chase Lee, DIFF 2014, No No: A Dockumentary