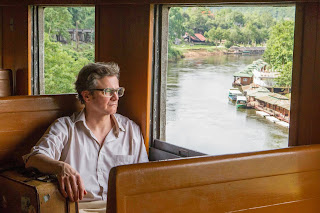 The Railway Man, written by Frank Cotrell Boyce (COCK and BULL STORY) and Andy Paterson (BEYOND THE SEA), and directed by Aussie Jonathan Teplitzky (BURNING MAN), is a drama adapted from the bestselling autobiography of British army officer Eric Lomax (Colin Firth, THE KING's SPEECH) a former POW during WWII. Lomax broke his silence to silence the psychological demons he had faced. Colin gives us another quiet, heartfelt, tour de force performance of the elder, self tortured and stoic Officer Lomax. Eric Lomax is a man of understated grace, intelligence, dignity and crippling privacy. He was taken prisoner and brutally tortured while a prisoner of war under the direction of a Japanese translator (Nagase) for his role in sneaking radio parts into the camp. Nagase is played by Tanroh Ishida (young Nagase) and Hiroyiki Sanada (X-MEN: THE WOlVERINE (old Nagase). Lomax and his unit mates had been forced into hard labor on the Thai/Burma "Death Railway". Shot in Scotland, Eric's homeland, Queensland and Thailand, major scenes were filmed on the actual Death Railway where tens of thousands of lives were lost.

The story unfolds in the 80's and flashbacks to war times. Young Lomax (Jeremy Irvine, WAR HORSE) is portrayed as dutiful, precise and reserved but eventually chooses heroics when the radio crime is discovered as friend Finlay (Sam Reid, BELLE) watches on in horror. The elder Lomax has become an emotionally broken and torn man as a result of his experiences. He has nightmares, terrors and flashbacks that haunt him and impact his personal relationships. He meets frequently with fellow army men nearby to drink beer and quietly commune. Close friend, Finlay (Stellan Skarsgaard (GIRL WITH THE DRAGON TATTOO) breaks the silence to Patti recounting what they all have rarely spoken of; having kept everything pent up inside as they suffer in silence and remain in their own personal self- imposed prisons. An irony we learn is that the younger Lomax is fascinated with railroads and trains. The elder Lomax remains obsessively so, even meeting his future wife (Nicole Kidman) on board a British railway. Finlay brings it to Lomax's attention that his former tormenter is still alive. Through the support of his wife, who fears he will end his torment through suicide one day, he travels to Thailand to confront, seek revenge on and put his past behind him once and for all. Lomax becomes sickeningly aware that his tormentor has been profiting from leading tours at a war museum where he was help prisoner for a time.

The need for truth and reconciliation exists for most any person who has been wronged, to what ever degree but Lomax's silences are physiologically deafening and how dark his heart has become is difficult to witness at times but a necessary means to an end. Waterboarding makes and appearance in the film and is a subject still pertinent in modern times.

Both Lomax and Nagase (the Japanese officer) were alive when the filming began. Cinematography is solid and the music, inspiring lyrical, both enhancing without overtaking the project. The film could have easily become preachy or obvious about its messages but instead it chose the way of quiet grace exemplified by the real Lomax himself. The pacing is slow as many British influenced films are. It does not really do a very good job promoting the history of the event and how deeply Asian railway workers, themselves, were affected by the harsh working conditions. The high heat and humidity and 16 hour work days took a massive toll on the Australians and literally thousands of local Asians as well and that fact is glaringly overlooked. There are messages in this film for everyone, such as overcoming hardship, healing, unconditional love, heroism, and the power of humanity. According to Boyce, Eric had wanted to communicate through his book and film what he had learned, that "we are better, stronger than we think we are, that being vulnerable is part of that strength, that love can bring you back from the very darkest place."
(Review by Cheryl Wurtz)

Posted by Dallas Movie Screenings at 9:08 AM