DIFF 2014: Evolution of a Criminal 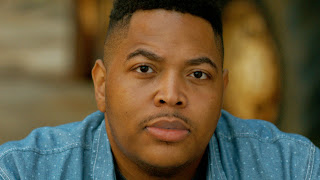 Not that I was disappointed, but to me, it was more like...

Evolution of a Kid who really cares about his family, Robbed a bank once with his friend who carried a gun and felt really bad about it, spent a tiny bit in jail, and went on to NYU to create films and be successful.

Is it kind of sad that I'm a TINY bit jealous of this kid?

I wish I could even THINK of going to NYU for film.

Darius Clark Monroe creates a documentary of his own life and a transformation into the person who he is today.

This is not what I expected going into the film, and at first, I was really upset.

Again...I do not read descriptions, but maybe I should.

I truly wanted to see the evolution of a real criminal.

Y'know, the people who kill other people, people who commit hard core treason, or even sociopaths and psychopaths.

But instead I got a story about how a kid just really cared for his family.

To be honest, I'd rob a bank for my family, and I think everyone else would too. People do insane things for family. Except we all know that it is morally wrong, and most of us do not want to die or rot in prison.

But Darius Clark Monroe cannot change his backstory, thus, this film was born.

I quickly began to sympathize with the film once it got into the meat of the story.
I realized that if I wanted to see a evolution of a REAL criminal, I could just watch The Discovery Channel.

Obviously, Darius has some talent. He went to NYU for film for pete's sake.

But I found Evolution of a Criminal lack luster.

The only part I found a slight bit intriguing were the re-enactment scenes. There was one point in the film that actually gave me goose-bumps and made me feel something.

It was a re-enactment scene where one of Darius' partners was wearing a skull mask, and the audience could actually see the whites of the kid's eyes in the skull. There was a really great build up to the scene with great transitioning music that just made it click for me.

I had felt something in that moment. I was truly nervous for Darius.

If the whole film had been like that one scene, I would have been a happy camper.

While the film was going, I gazed around and realized that I was the only one awake. However, it was probably because it was really late.

But once it was over, there were so many positive reviews of the film, that I felt bad.

Everyone perceives a movie differently, but I felt like I was in a totally different ball park.

Despite everything, I do commend Darius Clark Monroe for his bravery in telling his story. He put it all out there, and only someone who truly cares for his art can do that.

Check the film out for yourself.

You'll probably disagree with me, but that is completely okay.