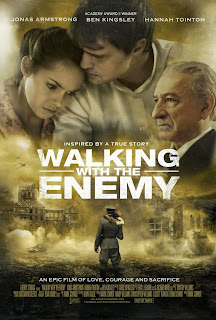 I certainly enjoyed screening Walking with the Enemy for I enjoy Ben Kingsley in about any role that he plays. In this film he portrays Miklos Horthy, the leader or regent of Hungary during World War II in 1944. He attempts to work with those invading his country as well as protect the interests of Hungary to preserve it and I would have liked to have seen more of him. Instead the movie centers around several characters in an attempt to give dept to the basic story. Inspired by the true story of Pinchas Tibor Rosenbaum, and set in Budapest, most of the basic Holocaust themes and subjects are addressed.

The film is a freshman directorial effort from Mark Schmidt, through the efforts of a multitude of screenwriters, has brought yet another period WWII piece to the screen. Elek Cohen is a Jewish university student, whose father is a Rabbi, comes home to escape the invasion into his university city when things get too dangerous. He tries to stay out of the fray in a labor camp but soon returns home. Actor Jonas Armstrong, appearing more Aryan than Jewish, fills the bill as the young man who fears for his home town as troops move perilously closer. He, with the help of friends and associates of his father ((the family had already been evacuated upon Elek's return) quickly come up with a plan to provide the appropriate "papers' to as many Jews as they can, which will protect them from being shipped out as well as divert truckloads of Jews being taken out of the city. Hitler has sent Col Adolf Eichmann, portrayed by Charles Hubbel, to handle the war effort in Hungary and deal with the Jewish problem.

The tides are turning on Germany but Hitler is quickly trying to make sure that the Jews in Hungary are dealt with in much the same way as those who went to the concentration camps before. The horrors of war and genocide are not entirely avoided in this film, as the reality rears its ugly head on several occasions as loved ones are impacted. Heroically, Elke and his friend Ferenc (Mark Wells) answer an internal call to action which brings them into ever bolder situations in attempts to help those arrested and protect those who are hunted and donning the uniforms, they infiltrate ever riskier situations to halt the Hitler assault. The film appears and feels historically accurate, as most of them do. The requisite romantic coupling that develops attempts to add humanity and heart in the midst of the chaos of war but it becomes less interesting than the internal struggles that Horthy and his subordinates and collaborators are dealing with. That is the more interesting story and a part of history that many people might not be aware of as the war was coming to a close. The film is worth a viewing but it definitely left me wanting more of Mr. Kingsley, who did not get enough moments to shine in this 2 hour film.
(Review by Cheryl Wurtz)