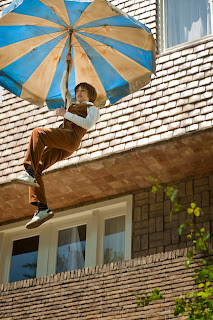 A fast paced whimsical feature from director Vincent Bal was adapted from the 2003 novel by David Grossman. The Dutch/English/French production written by Vincent Bal and Jon Gilbert is a delightful family movie with subtitles for the various non-English languages. That is just in case you bring smaller children who can't read that fast. This film is part of the family friendly program of DIFF 2014 co-presented by 3 Stars Jewish Cinema (http://www.3starscinema.com).

A few days before his Bar Mitzvah, Nono (debut actor Thomas Simon) is going to be sent to his uncle as he's constantly getting into trouble. His widower dad Jacob (Fedja van Huêt) is an inspector and has been teaching Nono his sleuthing methods. He learns to be able to assess any given situation and read the clues. Jacob's secretary/girlfriend Gaby (Jessica Zeylmaker) acts as a surrogate mother to Nono, She is obsessed by French singer Lola Ciperola (Isabella Rosselini) and the red scarf she wears on her head. Gaby wants Jacob to marry her, but he is still unhealed from the loss of Nono's mother. Although Nono wants to find about Zohara (Camille De Pazzis), his father won't talk, and Nono only has a picture of his mother taken from behind her.

On the way to his Uncle's house, Nono is given a letter that tells him that he's not going to his uncle. That there is a teacher on board the train that he must find using his inspector skills. The teacher will take him on a mysterious mission. His mentor turns out to be Felix Glick (Burghart Klaußner) a notorious criminal who was once arrested by Nono's father. The only inspector who was able to capture him. Felix leaves his signature charm on a chain after his jobs. It was supposed to be a lighting bolt, but everyone calls it a zig zag. Felix takes him on various adventures that involves trains, car chases, disguises and scooters while travelling from the Netherlands through France on a quest of his design.

There's a feeling of a 1970's zany road movie and at the same time it's an endearing coming of age story as Nono discovers the secret of him mother and reconciling with his father. There are some dark issues addressed, but it's balanced with the charming young actor, and the quirky Felix and Lola.
(Review by reesa)