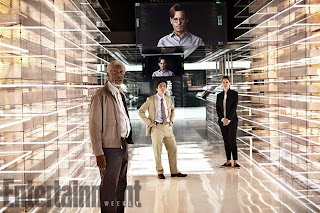 Cinematographer of Nolan's The Dark Knight and Inception Wally Pfister, makes his first directorial feature full of competent actors and visual effects in what the trailer promises to be an exciting concept. First script for screenwriter Jack Paglen touches on some interesting ideas of technology vs. humans but unfortunately it's bogged down, muddled and often times boring.

Johnny Depp has been stuck in some really lousy movies of late, and this film is not going to help. This time playing an almost normal human being for at least the beginning of the movie as Dr. Will Caster an artificial intelligence researcher. He and his fellow academic wife Evelyn (Rebecca Hall) are presenting a seminar of their work which will hopefully improve lives and save the planet. Some neo-Luddite radicals in the audience shoot Dr. Caster with a bullet that is radioactive. Will only has a few weeks to live. Evelyn and their best friend Max Waters (Paul Bettany) work on mapping Will's mind and uploading it to a computer. It had worked on monkey of a researcher who had also mysteriously died.

Agent Buchanan (Cillian Murphy) and A.I. Scientist Joseph Tagger (Morgan Freeman) are investigating the radicals lead by Bree (Kate Mara), peroxide blond with black eyeliner looking grim and serious. They believe that too much technology will ruin the world. They kidnap Max and try to turn him to their cause. After all they were influenced by his writings that also questioned the conflict of technology and human individuality. Meanwhile Will's brain, now uploaded to a computer becomes sentient and wants to be connected to the Internet. Once online, the demand for more power requires Evelyn to use the millions of dollars that he transferred to their account to build a facility in the middle of a small desert town fueled by hundreds of solar panels.

Very quickly Will the A.I. has managed to complete his work on nano technology and it's used to not only cure people, but it also connects them to him and gives them incredible strength making them hybrids . Evelyn is getting a little freaked so when Tagger slips her a note telling her to run, she begins to see that her former husband is getting a little out of hand. And like most movies that deal with errant computer programs, the best way to defeat them is a virus! However the side effect would be that the whole world wide web will also be kaput. The future as we are shown in the beginning of the movie is a world without power.

Like in Terminator when Skynet takes over the world, this film could have used a Terminator to come from the future and save this one.
(Review by reesa)