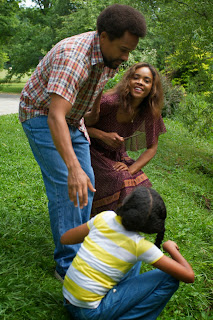 Going into this film, I didn't know what I was going to expect. I genuinely love to dive into films knowing completely nothing about them.

However, diving into this one, I knew Wayne Brady was going to be in it which makes it automatically amazing.

But this isn't your average "Who's Line is it Anyway?" Brady, it was a "I will steal your woman, give her drugs, and put a cigarette in your face" Brady. It was incredibly frightening. This film truly showed what a versatile actor Brady was, and I enjoyed every minute of it.

Granted, Hill Harper gives the best performance I've ever seen in a while. It's very common to always see actors resort to yelling and screaming to get their feelings across, but Harper had some genuinely great and quiet moments that really built on screen. Absolutely phenomenal.

1982 has to be one of my favorite within The Dallas International Film festival.

Directed by Tommy Oliver, this film had every level a person could want. Portraying a Philadelphia family that is falling apart by the seams due to drug addiction, the film gives an insight into the depths of a drug epidemic and what it feels like to lose someone who is incredibly close to you.

Except Comedy...DON'T go into this film expecting a laugh. You'll have some heart warming moments here and there, with one of those slightly breathy laughs in the beginning, but never did I once "BAAAHHAAAAA." And I'm truly glad I didn't. It would have taken so much away from the film. Everything was balanced so perfectly, and the ensemble is phenomenal.

Not only is 1982 one of my favorite films of he year, but it also ripped my heart out, held it in front of me, and I watched it beat while my eyes sprung leaks.

That's going to be an expensive doctor visit.

I can't think of one downfall besides that it seemed really "Oscar-y."

But despite that, the film was truly one of the best in the festival. It reminded me how important family actually, and for a film to actually achieve that goal is truly magnificent. It had heart when it needed heart, the acting of an Oscar worthy cast, and the story line is genius with a fantastic ending.

Do me a favor, and check out this film if you have the opportunity.

P.s. Do not forget your therapist at the office. Bring them home with you if and when you have the opportunity. That is how heart wrenching this film is.

P.p.s. Don't eat anything while watching this film. There isn't anything more annoying than someone fumbling for an old Werther's Original in their pocket/purse and hearing them suck on five of them the whole time while someone is having a "moment" on screen.