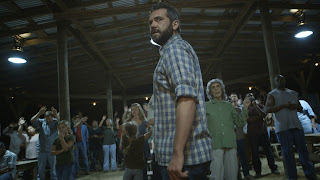 Writer and director Ti West has his fan base and I like his films but I by no means love them. I guess you can say I appreciate what he does. Off the bat, this is the most disturbing film he has made. Because the one thing about this one compared to his others is that this one felt more realistic and grounded. Ti West has written and directed " The House of the Devil", "The Innkeepers" as well as a segment on "ABC's of Death" and "V/H/S". What Ti does well is make slow burning terror. He builds great characters and situations around them without being cheesy and really builds the suspense and terror because of the burn. " The Sacrament" is no exception. It's a slow burner but what feels realistic about is that it's shot in a mockumentary style to give it a more grounded feel to the subject matter. Now the one thing I have never been to fond of in his films is the acting. His acting always has that "B" movie feel, which doesn't make any sense because all of his films have cool and interesting concepts. The acting in this is very "B" movie but the one standout is from Gene Jones who plays "The Father" is compelling and very creepy. I enjoyed all of his monologues and that also has to do with Ti's writing. The cinematography is good and like I said the mockumentary look does make the film look and feel more realistic. The film is an hour and half long and it does drag in a few parts but overall it's very engaging and disturbing. The violence in this one, compared to his other ones, felt a bit more realistic and violent but I was still entertained. It's also best if you know as little as possible before seeing this. 6/10
(Review by Chase Lee)