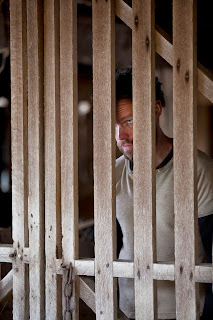 This is a tricky one because I don't know whether I like it or not. Director James Franco, who also co-wrote, adapts this book from author Cormac McCarthy, who also wrote No Country for Old Men and The Road. McCarthy's adaptations are interesting and always have endings that divide audiences on whether they like or hate it. Whats different between this one and previous works is that the main character, played very well by Scott Haze, is not remotely relatable or likable. He is a disturbingly violent person and at the end of the film I wondered what the point was and I think I understood what Franco was going for. I got that this is an observation of man and how man can't be tamed. Because this guy was so despicable, you felt sorry for him in some scenes, so it was like watching and observing a wild animal. And once again, it has an ending that you have to sit back and go, " I don't know if I am ok with that." But after awhile I think its an ok ending. The main standout was Scott Haze. This guys acting was incredible and he made this movie as he is in nearly every frame of it. He sounded like a southern redneck and pulled it off with ease. The cinematography is sometimes eerily haunting and I loved all the outdoor shots. It had a gritty, realistic feel which is perfect for this subject matter. The film is an hour and forty minutes, roughly, and I was intrigued to see what was going to happen to Lester that it did fly by. It had a nice and steady pace. Overall I love Franco's direction, Haze's acting, The cinematography is nice and it's paced well. I need to see more Franco's work and I am ashamed this is the first one I have seen him direct. 6/10
(Review by Chase Lee)