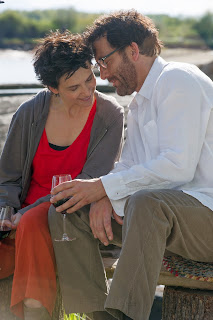 Words and Pictures is a 2013 romantic comedy/drama scheduled to be released May 23, 2014. It was a centerpiece screening at the Toronto Film Festival in September. It stars Clive Owen as a gifted but eccentric honors English teacher Jack Marcus, or Mr. Mark to his bright students at Croyden, a New England prep school. Mr. Marcus is suffering from writer’s block, within an exclusive educational setting that still expects him to produce and publish as professors at Universities do. He teaches outside the box and is madly in love with words and the mental images they create. As a teacher, he portrays his passion for the written medium, enthusiastically, to his students, who all love him. Marcus is also on a self-imposed downward spiral as an alcoholic, continues to bring negative attention to himself by showing up late for work and making drunken scenes at the local high end watering holes. The realization soon sets in that the “powers that be” may have it in for him in an upcoming performance review, including a school board member he once had a tryst with. He is simply not worth keeping around anymore, despite his obvious gifts for teaching and is rapidly becoming a liability to the school’s reputation. He is battling everyone around him in a variety of ways, through mental games and philosophical challenges, but it is very clear that he is his own worst enemy. He grows ever frustrated with the plugged in generation he refers to as “droids” who are rapidly losing their ability to be creative.

Juliette Binoche lights up the screen, visually, portraying an Italian-born fine art painter whose personal and professional life is being forced to start anew. She has left the big city art scene and has retired to the affluent country but joins the Croyden faculty as the honors art teacher. She is suffering from rheumatoid arthritis and needs a cane to help her walk. Fiercely independent, Dina DelSanto is a woman of few but very well-chosen words. “Don’t trust the words. They are lies” provides the fighting words. Reserved and clipped, she is being forced to redefine her artistic style as a result of her physical limitations and frustrations. Former successes she enjoyed are now fleeting and she has no interest in the head games that Jack so loves to play, but she plays along reluctantly. Her reputation as “The Icicle” has preceded her and Jack wants to see if he can break her through words. She just wants to challenge her students to never settle, never be satisfied until they produce their very best. Ms. Binoche, who actually created much of her own abstract art in and for the film, is a most interesting study as her rough, self-protective exterior begins to crack and open up just a little as she rediscovered her former joy through painting.

The playful and caustic banter, from the word filled screenplay by Gerald Di Pego (The Phenomenon, Message in a Bottle, The Forgotten), is peppered throughout their intensifying interactions and it doesn’t take long for Jack to see a worthy adversary in a proposed school wide battle of Words and Pictures for she is every bit as passionate about pictures as he is about the English language. It is “A picture paints a 1000 words” versus “A drop of ink may make a million think.”

The bulk of the film follows the two as they move from rivalry to relationship. Jack woos with words, while she escapes into her art but as his words turn into lies and broken promises, he must come face to face with where he is at in his personal and professional life. I found it a little tedious that both intellectuals did not already know that the gifts of mental images from words and the expression of feelings beyond words through art always has and always will cohabitate but then we would not have our story. The competition that the students pick sides for and eventually celebrate in an assembly and show become a buried side story and anticlimactic ending as do the “flittings in and out” of the students in the classrooms and hallways.

The script is just a touch over the top and forced at times, as if trying a little too hard to be witty. Any score it had is forgettable. There is a brief moment that channel’s Dead Poet’s Society and a solid job all the way around is made of the setting of the private school world, with all of its idiosyncrasies and politics. As an educator and former high education student, I can honestly say I have never encountered any teachers who closely resemble these two but I would have loved to have had them both, despite their diametrically opposed positions. Passion for creative expression in a world so stolen by cold technology needs encouraged and inspired where ever we can get it. Director Aussie Fred Schepisi’s list of films display a penchant for wordy scripts, including “Six Degrees of Separation”, the forgettable “IQ”, and “Roxanne”, another “woo 'em with words” movie. At his presentation last night, he spoke of his great love and admiration for this script and that his very first film “Barbarosa”, was filmed in Texas.
(Review by Cheryl Wurtz)