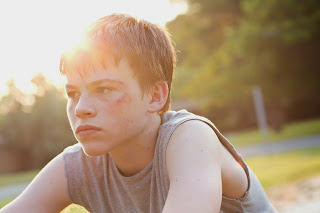 I was a teenaged boy once. I know it's hard to believe but what I can tell is that this film very accurately portrays a group of teenaged boys and their behaviors. But what I find most impressive is that this was written and directed by a woman. I am not saying a woman can't write dialogue for a guy, I am just saying it's impressive that she accurately nailed how a group of male teenagers act and the dialogue that is uttered at that age. This story follows a teenaged boy, his friends and his little brother and their daily lives. The little brother is taken away by Child Protective Services and the main character fights to get him back. So it has strong elements of friendship and the relationship between brothers. I can relate to this because I have a younger brother and I was a teenager once. So the overall direction of the story and dialogue was very well done. Also the choice, from the director, to use handy cam was great because it added to the grittiness and realism of the story and characters. The actors who played the kids were very good but we don't see this movie for them when we read who is in this. Aaron Paul, Jesse from "Breaking Bad", plays the father of the main character and he is fantastic as this dad trying to raise these boys by himself. There were a lot of layers to his characters and, besides the kids, he was the best part about this. The cinematography felt grounded and gritty which only enhanced the story. I also noticed the colors were mostly orange and felt like it was dusk time. I liked the overall look to it. The editing was paced well. It felt a bit slow in the middle but that doesn't mean I wasn't interested and intrigued by this story or these characters. This is a great film on friendships and the relationship bond between brothers. I personally related to this film and in some way I think you can relate to the youth and the freedom you felt while being young. 8/10
(Review by Chase Lee)