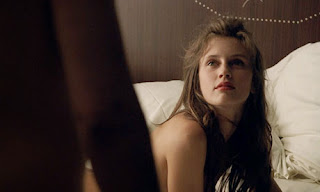 I love French films and, quite frankly, they are way better than films here. So as you can tell I was probably looking toward this film. But there was something I couldn't get into and, unfortunately, it was the main character. I felt like she was selfish and a terrible person. It reminded me of my ex. Not only that but I felt like she was wooden for most of the time. I understood what the director was going for and I understood the main characters arcs but it just seemed off. I think it's because I couldn't connect with character in anyway. The film follows a seventeen year old girl who loses her virginity and she didn't really like it. So she becomes a prostitute on the side. You can tell she enjoys the anonymous hookups and you can also tell this is how she feels love. I really like the story and it is intriguing but the main actress just didn't sell it for me. Not to say she wasn't a good actress, because she was, it was just the character she portrayed. The acting all around was great and there were no complaints. This film, like most French films, has beautiful cinematography. The scenes where the main character was with her family is bright and happy and when she was at a clients house for sex it was dark and grim. I love the contrast of shots. The editing of this film is where I have to give it a lower grade as well. The film is a n hour and half long but it felt like it was two hours or more…in a bad way. It felt a lot longer than it should. Once again I think its because I didn't like the main character. The music did help it move from scene to scene as it dragged in a few parts. Overall it's acted and shot well and the story is intriguing, though it felt clunky in some sections, but I could never get behind the main character and her personality. I still love French films though. 6/10
(Review by Chase Lee)

Posted by Dallas Movie Screenings at 7:01 AM