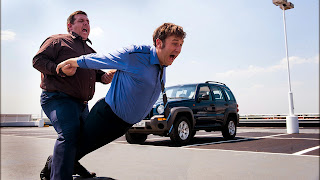 All I want out of life is to salsa dance with Nick Frost, and this movie blessed me with this beautiful gift.

I can already envision my future dreams.

Frost and I are dancing to hot, salsa music. Both feeling the "fire in our heels..."

Then he dips me, and we get married.

This has nothing to do with the film, but my imagination runs rampant when I watch films with some of my favorite people in them.

I hate saying this, but I'm extremely biased for this film. I'm a HUGE Nick Frost fan. The man's a great actor, and it was a pleasure getting to see him in the spotlight. I'm always a sucker for the duo of Simon Pegg and Nick Frost, but I thoroughly enjoyed seeing him as the main protagonist. He was funny, he was heartfelt, and he has a rockin' Al Pacino impression. I'm sold.

Even though I am biased, I understand Cuban Fury was not the best comedy in the world. I get it. But I had so much fun with the film.

And no one will take that away from me.

My inner geek and outer geek were screaming with delight the whole time.

Now, on casting alone, you should see this film.

With, if I do say so myself, a bad ass cameo.

I love each of those actors for their own nerdy reasons.

Naturally, I had some problems with the film. Some of the jokes landed flat, Chris O'Dowd was just there to be a dick (to be fair, his purpose in the film was to just be a big ol' dick but I at least wanted some charm), they over killed it with fat jokes, I wasn't able to hear one of the funniest characters in the whole film half the time either because of the audience or his accent, the climax was bland and needed to be more poignant, and there are some goofs here and there.

But all in all, I took the film for what it was. It was there for the audience to just have a good time.

Will regular people remember this film? Probably not.

It was almost made for undying fans of Nick Frost, like my friends and I.

The writing is funky, and at times stale, but a movie goer must learn to have fun.

I also had the pleasure to sit in front of people who actually partake in salsa and apparently they put in some famous salsa dancers so....

My advice too you? Don't listen to those who are snarky towards Cuban Fury. Take this film for what it is. A Goofy Movie.

But take it as a silly film. Take your boo thang out if you guys are bored and watch this movie. Who knows? You might actually get inspired and have "fire in your heels" also.

And Nick Frost fans, do not miss this film. There is a special surprise.

Well, just stay off IMDB, and it will stay a surprise.