DIFF 2014: Queens & Cowboys: A Straight Year on the Gay Rodeo 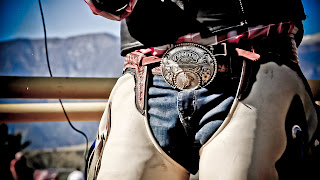 For the past 30 years the International Gay Rodeo Association has been roping and riding across America competing for the coveted Cowboy of the Year buckle. Director/writer Mike Livadary covers a year on the circuit and the colorful individuals that call the rodeo their home. The image of the cowboy has been typically the salt of the earth manly man of southwest. And these cowboys and cowgirls are just like anyone else who live in the country, tend their animals and just happened to have a different sexual preference.

Women fare better at the gay rodeo as they are welcome competitors in bull riding. We are introduced to Char Duran from Colorado who has a regular job to support her rodeo habit. Always aiming to win a buckle in her event, she practices on a home made barrel bull. Her irrepressible spirit keeps her coming back no matter how many broken bones and bruises she incurs while being thrown off an angry animal. Ty Teigen was the heart and soul of IGRA who experienced discrimination from the regular rodeo circuit until finding a home to display her roping talents while fighting ovarian cancer.

The film also follows Chris Sherman from a small town in Oklahoma who refuses to leave despite the local prejudice. He won a college scholarship to Team Rope, but no one wanted to partner with a gay cowboy. He had quit, but found a home with the IGRA. As a descendant of the legendary Wyatt Earp, Wade Earp came to IGRA through western dancing contests. Since then he and his 25 year old horse has been chasing the top buckle always coming in as runner up to the number one cowboy David Reiner who unabashedly claims he has won 732 buckles in different events. Just like any other rodeo, people compete in 13 different events to accumulate points to be invited to the nationals.

In recent years the IGRA which is run by volunteers has been suffering from the shrinking membership, rising costs, and resistance of some venues to allow the rodeo's to be held. The average age of the competitors is their 40's and they want to encourage younger participants to join. There are currently about 5000 members from 28 different chapters in the U.S. and Canada. The rodeo is considered an amateur level rodeo, and the events are campy with cross dressed clowns and rodeo Queens. The rodeo royalty is in charge of the fund raising which is donated to the local charities.

Queens & Cowboys won the best documentary and the audience awards at the Santa Barbara International Film Festival and is up for an audience award for DIFF 2014. It's an interesting and entertaining look at a world that city folks need to see in this day of LBGT awareness trend and to support when the rodeo comes back to Dallas.
(Review by Reesa)

Posted by Dallas Movie Screenings at 10:33 AM

Email ThisBlogThis!Share to TwitterShare to FacebookShare to Pinterest
Labels: DIFF 2014, Queens & Cowboys: A Straight Year on the Gay Rodeo review