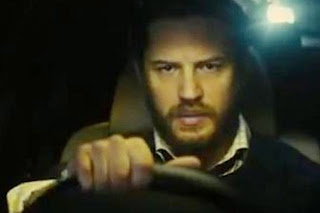 This is the Tom Hardy show. Like the film "Buried", "Locke" is all from the comfort of a car as Tom Hardy's character take a trip and as he is driving he is making a lot of phone calls to people that he knows. That is all I will say considering I don't want to spoil anything. Writer and director Steven Knight constructs a compelling, suspenseful story where the whole hour and a half is in a car. This is extremely difficult to do because you have to catch the attention of people and hold it for that period of time since there really is no scenery change. What I also liked is Knights ability to develop a character with a wide range of human emotions all within the time frame. Hardy's character had flaws but he was understanding and I could relate to him. The director also used the road and the car as a metaphor for taking a direction in life and I thought that was brilliant. Tom Hardy is the only person seen, as the other voices are from the phone calls, and he nails it. Tom was so amazing to watch as this normal guy goes through every emotion including: laughter, sadness and anger. It's quite fascinating and it was almost like studying our race as humans and what can go through in terms of emotions. The cinematography is good and changes up typical car shots with some different ones but in the end you are limited to a certain amount of angles. The film is an hour and twenty-five minutes but it flies by as this is a suspenseful movie and you want to see what happens to his character and what he ultimately chooses. This is an intense movie and it hooks you in as the situation gets more and more out of control until he finds his way. If you like Tom Hardy, one location movies or a good suspenseful ride, this is the film for you. I really enjoyed it. 7/10
(Review by Chase Lee)